Unlike matter, light is massless and does not interact with itself, which means that in isolation it cannot form complex structures such as fluids or solids. However, with the help of solid state devices one can change these properties and create quantum fluids of light. To give photons mass, one can restrict them in one-dimension using a semiconductor microcavity (made of distributed Bragg reflectors). This changes their dispersion relation in the two-dimensions they are still free to move in from a massless, linear dispersion to a massive, quadratic one.

Interactions can be introduced by aligning a semiconductor quantum well inside the microcavity. The cavity photons will interact with electron-hole pairs, called excitons, trapped in the quantum well, and as these excitons interact with each other, they behave as a proxy for photon-photon interactions. Diagonalising the Hamiltonian for the whole system, we see that the photons and excitons together form massive, interacting quasi-particles of light called polaritons. 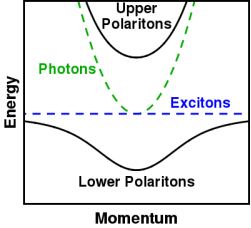 Because of their photonic component, polaritons have a very low mass allowing them to ‘condense’ at relatively high temperatures (on the order of 10K in GaAs, but up to room temperature in organic materials). This makes them ideal for studying quantum fluids – that is, fluids displaying macroscopic quantum effects such as superfluids – and also the phase transitions to these states. Another interesting property of these systems is that they are usually out of thermal equilibrium. This is because photons leak from the microcavity on very short timescales and the system must be pumped with a laser to maintain a steady state.

Our research is concentrated on using analytical and numerical techniques in collaboration with experimental groups to understand the properties of these non-equilibrium, two-dimensional quantum fluids of light.

View all posts by cpmckeever

Our work on the question of superfluidity in polaritons was featured in New Scientist and is discussed in our video below.

Our paper on the properties of the signal mode in the polariton optical parametric oscillator regime was published in PRB.

Our paper about the Question of Superfluidity in Polaritons done in collaboration with Jonathan Keeling from St. Andrews has been published in Nature Comms.

Our group organized the CEPC2018 workshop in Milton Keynes, UK.

Marzena went to Santa Barbara for the DYNQ18 program.

Coherently driven microcavity-polaritons and the question of superfluidity
Nature Comms. 9, 4062 (2018)